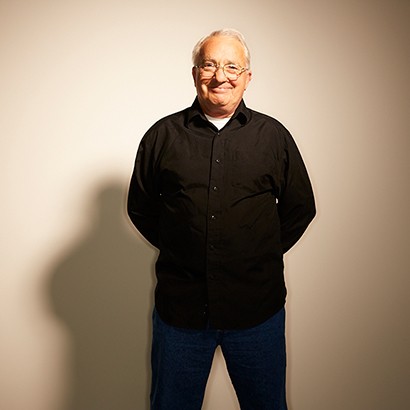 People who see me don’t believe I have lung cancer.

Seventy-year-old John W. is full of energy. He often can be found dancing and singing to the more than 150 songs on his MP3 player. He takes pride in mowing his own large lawn on the east side of Indianapolis. He volunteers regularly and is involved in his church community. He does all of this despite having Stage IV cancer.

John, a retired public accountant, was diagnosed in 2013 following a bout with pneumonia. Upon referral from Community internist Louis Wright, MD, he had visited Charles Brian Quick, MD, a pulmonologist practicing at Community Health Network. A CT scan and biopsy confirmed a slow-growing tumor in his right lung.

The day after John received the diagnosis, he had an appointment with Robert Shoemaker, MD, a thoracic surgeon with Community at the time. He recommended surgery to remove John’s upper right lung in order to extract the potato-sized tumor from his body.

John asked to think about it and eventually scheduled surgery 30 days later, enough time to allow him to be at peace with the procedure.

“After surgery, I decided I’ll just give it up to God,” said John. “If he wants me to be around, I’ll be around.”

Following John’s diagnosis, his wife Vicki, a retired RN, spent time online looking for an oncologist. She found Pablo Bedano, MD, an MD Anderson Cancer Network® certified physician practicing at Community Hospital East, at eCommunity.com. She felt strongly that this was the doctor for them, and she and John were thrilled when Dr. Shoemaker also recommended Dr. Bedano for John’s care.

“We are so blessed to have him,” said Vicki, grateful for the honest, compassionate care Dr. Bedano has offered them.

“It’s like a family,” John said of his team of Community caregivers. “Imagine how fortunate I feel to be a part of this family.”

At the time, John decided not to pursue additional treatment as the effectiveness of it would have had minimal effect on the cancer’s recurrence. In 2015, John’s cancer returned—this time, in both lungs. Dr. Bedano recommended chemotherapy.

“I’m probably the luckiest guy in the world,” he said regarding having both few side effects from treatment and the support of his wife, Vicki, a retired Community pediatrics nurse.

John and Vicki are also grateful for the financial support Community was able to provide them through the Oncology Patient Assistance Fund, which offers $250 vouchers that patients in financial need can use to purchase food, gas and medicine.

“We went in with no expectations,” said Vicki. “As it turned out, there was a team of financial navigators thinking through everything and figuring out how to help us.”

“We’re not wealthy people,” she added. “Talk about timely. We are on a fixed income, and, at times, we’ll pay our bills and there is nothing left for groceries or gas.”

The Williams have received two vouchers—one every six months, as the Fund allows, since his cancer recurred in 2015. The support was unexpected, and the Williams are grateful to have been connected with Chrissy Wilson, a Community financial counselor.

“We weren’t asking for help,” said John, who is overwhelmed by the generosity of donors who support the Oncology Patient Assistance Fund. “Without their backing, we couldn’t fight this fight.”

Today, John’s cancer has seen no new growth. He continues to receive chemotherapy every three weeks and CT scans every few months—and will for the rest of his life. Throughout it all, he keeps on dancing, singing and mowing the lawn.

“Maybe I’m here to encourage other people to feel better,” said John, who recalls dancing to the scale when visiting Dr. Bedano’s office in order to make the nurses laugh.

The Williams’ love for their family, friends, laughter and life is apparent, and they spend their time focusing on living—not on cancer. Above all, they are grateful for every moment they have.

“Be appreciative of each day; it is precious,” said Vicki.