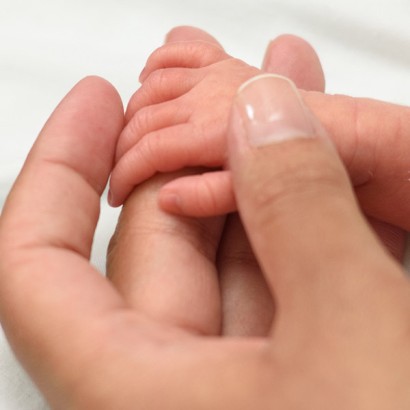 My daughter’s life was in danger, and they saved her. They are 100 percent professional about it. There was no hesitation whatsoever—and they do this every day.

When John and Andrea Rice learned they were expecting twin girls, the first-time parents were ecstatic and began making plans to welcome their little ones. However, things didn’t exactly go as they expected.

In May of 2016, at 25 weeks pregnant, Andrea went into labor. John had arranged for an ambulance to transport them from their home in Fortville to Community Hospital North, where Andrea received her OB/GYN care through John Wagner, MD.

Once there, Andrea was immediately taken to the operating room. Three minutes later, little Sophia was delivered at only one pound, nine ounces. Her sister Isabella followed shortly thereafter, weighing one pound, twelve ounces.

“It was scary,” said John. “That is the primary, visceral feeling that overwhelms you.”

The girls were admitted to Community’s Neonatal Intensive Care Unit (NICU), where they would spend the next four and a half months working to overcome their low birthweights and some of the standard challenges that a baby born too early may encounter.

“It was tough having our girls in the NICU, but it was not tough being at Community,” said John.

There, John and Andrea experienced the abundance of compassion and exceptional care for which Community’s NICU is known.

A week into Sophia and Isabella’s NICU stay, the tornado sirens sounded. John was in the hospital cafeteria and rushed to climb the stairs to the NICU to be with his daughters. The stairs were crowded as individuals made their way to lower levels, but the NICU care teams were focused on caring for the little ones under their care. Nurses and physicians continued to make their rounds and check on patients while monitoring the weather situation.

John asked Ashlyn, RN, who was working that evening, what would happen in the event of a tornado. Ashlyn explained that the girls, because of their vulnerable state, would need to stay in their room. However, sensing John’s concern, she immediately clarified that she would also stay behind with them. “I’m not going anywhere,” she reassured him.

As is the case for many premature babies, a few weeks later, one of the girls stopped breathing. Immediately, Community’s NICU nurses took action and remained calm, ensuring the infant both resumed breathing and stabilized.

“In a way, they’re like superheroes,” John said. “My daughter’s life was in danger, and they saved her. They are 100 percent professional about it. There was no hesitation whatsoever—and they do this every day.”

While John and Andrea both have full-time careers, their employers were flexible, allowing them to work remotely from the NICU so that they could be with their daughters. Because of this, John and Andrea were able to be at the NICU every day from 8:00 a.m. to 10:00 p.m., seven days a week.

“We worked in the parents’ lounge, in the girls’ room – I would take phone calls in the stairwell,” said John, a leader at Salesforce and co-founder of Coding4Kindness, which organizes hackathons to help non-profit organizations with their technology needs.

Yet, John often overheard fellow NICU parents express that they’d like to be at the NICU with their baby more.

“We were there almost all the time, but there weren’t many others who could be,” he said. “We are really, really lucky to work for the companies that we do. Other NICU parents had so many demands for their time—their jobs required them to go to the office or they have other children who need cared for.”

To help bring peace of mind to more families, Community has embarked on an effort to bring NICView™ to the NICU. A small camera that attaches to an infant’s bed, NICView provides an unobtrusive way for parents to see their little one when life’s responsibilities require them to be elsewhere. On any device with internet access, parents need only log in to a secure website where they can see their baby in real-time through password-protected streaming pictures.

“NICView cameras would have been great for our family,” said John, who is undertaking several efforts to support the NICView fundraising campaign. “When we left each night, we obviously couldn’t see the girls or know what was going on with them. There is some comfort in seeing them sleeping, and NICView could have helped ease our minds.”

NICView also would have allowed Sophia and Isabella’s extended family, who live a couple of hours away, to securely log in and see the girls progress and grow over their more than four months in the NICU.

John is passionate about this effort and is willing to put his network to work in order to make a difference for future NICU families, helping them bond with their child even if from afar.

Above all, he is grateful for the care his daughters received at Community’s NICU and that his girls are healthy and happy today because of the care they received.

“When you leave your child there, you know they don’t just have a nurse with them—they have a protector,” he said.

Newborn Care
After your baby has arrived, Community grows with you and your family - with pediatricians who are experts in caring for children, newborn through adolescents and family practice physicians for the whole family.
Learn More