Watch Timelapse and Live Videos of the Progress

What's in each building?

On April 26, 2017 the topping out ceremony took place - almost a year to the day that the time capsules were opened. Watch as a beam with the names and well wishes of patients and caregivers rises five stories to top the new tower at Community Hospital East and the Pepper Construction crew puts the beam in place.

On April 27, 2016 time capsules buried in 1955 and 1991 on hospital grounds were opened. The items inside revealed a glimpse into Community East's historic past. Contents from 1955 included newspapers, pledges from hospital founding fathers, a vial of polio vaccine, list of original donors, photos, bylaws, an American flag with 48 stars, and an Eli Lilly book. The 1991 capsule included guiding principles, newspapers, a VHS tape with a Community commercial, photos, a training manual, t-shirt, American flag, brochures for coping with war, advertisements, coupons and magazines. 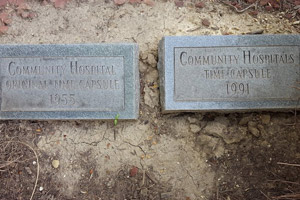 August 19, 2015—A new chapter began as the network broke ground on a brand new Community Hospital East. The $175 million dollar investment in the neighborhood sends a message of commitment to those who live there. Read more here or watch the video below for interviews and footage from the event.

Each floor of the new patient tower will have updated patient and clinical areas, from the pharmacy and cafeteria to updated operating rooms and maternity suites. Explore the new plans below.

Click an image to open a PDF of that floor's design.