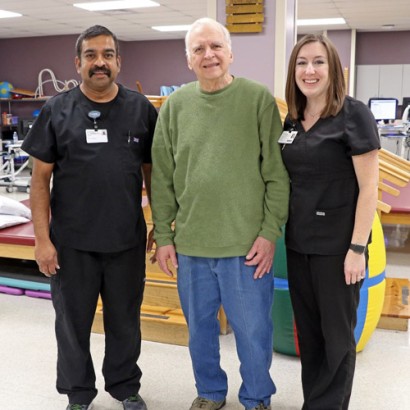 It is people highly motivated to help you succeed and get back what you had. That positive environment is so uplifting and so motivational.

Richard Stroud demonstrated his remarkable recovery with a short two-step dance across the floor of the therapy gym at Community Howard Specialty Hospital.

The image is starkly different than when the 78-year-old former weight lifter and ballroom dancer arrived at the inpatient rehabilitation hospital three months earlier. Richard’s wife, Doll, recalls Richard arriving at Community Howard Specialty Hospital on a stretcher, flat on his back and unable to sit by himself. Richard was left largely immobile after a stroke on September 3, 2019 severely impacted the left side of his body.

In the five weeks after arriving at the 30-bed inpatient rehab hospital, Richard made significant progress thanks to his determination and the support of physical and occupational therapists who led him through intensive therapy.

“All of these people have just helped me so much,” said Richard.

Looking back, it is the positive motivation and caring team atmosphere that stick out to him the most.

“You think of them as family,” Richard said of the team at Community Howard Specialty Hospital. “It is people highly motivated to help you succeed and get back what you had. That positive environment is so uplifting and so motivational.”

After returning to his home, Richard chose to continue to go Community Howard Specialty Hospital for continued outpatient therapy.

The familiar faces, hugs and encouragement were a welcome sight.

“It really felt like I was coming home in a way,” Richard said of returning for outpatient therapy sessions.

Stroke Rehabilitation
We offer comprehensive programs and services for all phases of stroke rehabilitation, with an emphasis on treatment, patient and family education, and stroke prevention.
Learn More