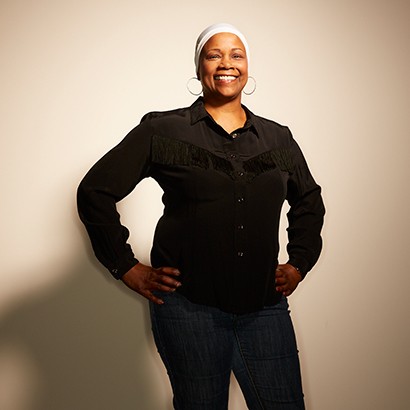 I decided to fight. One night, I was lying in bed crying and decided I wanted to live. The next morning I just got up and got at it.

On Friday, December 11, 2015, Priscilla had a mammogram, ultrasound and biopsy for a lump she found in her breast. It had taken Priscilla weeks to make the original appointment with her OB/GYN who recommended these tests, finally calling after a friend encouraged her to do so.

At the time, Priscilla was working toward her MBA and had class that night. She remembers going to class that evening, feeling as if she were in a fog.

The following day, Priscilla met with Timothy Goedde, MD, an MD Anderson Cancer Network® certified physician specializing in breast surgery at Community Health Network. He explained the process to her and talked through her different options and scenarios.

“It kind of helped to ease my fear, but I still felt numb and alone,” she said.

For Priscilla, all of the appointments brought back a rush of memories of her late husband Michael’s battle with cancer before he passed away on September 7, 2004. He too had been treated at Community Cancer Center North, and he even had Dr. Bhatia and Dr. Graybill on his care team. Because of that, the physicians and many nurses at Community Cancer Center North remembered her.

“You don’t know how good that makes me feel, being remembered,” she said.

In her initial appointment with Dr. Bhatia, he explained that her diagnosis—at the time believed to be Stage II breast cancer—was different from Michael’s. He shared with her a plan for treatment which would include chemotherapy.

“I felt scared, but I was trying to be brave for my family,” said Priscilla, mother of a young woman named Destinie. “I didn’t want to squander any time I might have left.”

That same month, Priscilla received her first voucher through the Oncology Patient Assistance Fund, which supports cancer patients fighting to overcome financial barriers to food, transportation and medicine during their cancer battle.

Jean Clifford, a Community Health Network social worker, sat down with Priscilla and spent time learning about her and her life thus far. Her goal was to ensure Priscilla’s life would not be too disrupted during her treatment. Priscilla was self-employed, and she knew it would be difficult to work with her upcoming rigorous treatment plan. However, she wanted to deplete her funds first before accepting help, and so she did.

In January, she lost her hair and began to notice changes in her skin and nails. She learned her cancer had metastasized to her liver, requiring additional chemotherapy, and that her cancer was now considered to be Stage IV. She was feeling down and not like herself, but she made the conscious decision to turn that around.

“I decided to fight,” she said. “One night, I was lying in bed crying and decided I wanted to live. The next morning I just got up and got at it.”

February 12, 2016, Priscilla’s birthday, brought a new blessing. Her granddaughter Kai was born and helped to provide a new inspiration for Priscilla. Between Kai’s birth and the support of her daughter and friend Diane at nearly every appointment she had, Priscilla was feeling stronger with each day.

The month prior, Priscilla reconnected with her long-time friend Sherrod, who expressed his desire to be there for her and stand with her on this journey. “When I laugh, cry or feel scared—he’s there,” Priscilla said of their close relationship.

Priscilla was also grateful for the support of Holly Wright, RN, her Community nurse navigator who served as a guide and liaison throughout Priscilla’s treatment and doctor’s appointments. “She really went the extra mile for me,” said Priscilla. “She was my right arm, my friend holding my hand—like Linus from Peanuts with his blanket.”

Following chemotherapy, Priscilla underwent a lumpectomy under the care of Dr. Goedde as well as a breast reduction and lift with the help of Jason Cacioppo, MD, a plastic surgeon at Community, who made Priscilla laugh during an otherwise difficult time.

Around this time, Priscilla received a second voucher through the Oncology Patient Assistance Fund, helping her purchase healthy food to sustain her body. Then in August, Priscilla began radiation, which lasted through September.

“I encourage anyone facing this battle to be open with your navigator and social worker about your current situation,” said Priscilla. “They are trained and have the resources to help point you toward help that may relieve financial burdens while you are going through treatment if it’s affecting your work. I’m eternally grateful for Jean and Holly because I was able to maintain my apartment and vehicle during this difficult time.”

Throughout it all, Priscilla has retained her sunny personality. Despite her continued battle with cancer, she agreed to participate in Faces of The Giving Gig to give back to others.

“My older brother Cliff says people remember me because I always smile and that I’m the smile of the family,” she said. “I want to be a smile for other people facing a cancer diagnosis. It’s not that I don’t feel sad or worried. I just want to continue living optimistically—that’s part of my smile. So if I could share my story that could help someone else—why wouldn’t I do that?”