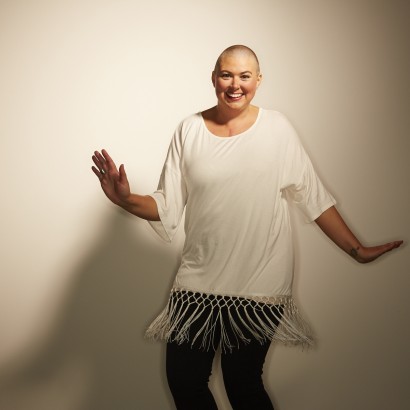 I was feeling stronger and stronger after my cardiac rehab. Then, I found a lump in my breast.

Every six months Nicole, a 35-year-old mother and wife, would have an echocardiogram test to monitor the growth of an aneurysm that had appeared several years ago. Afterward, she would visit her cardiologist from Community Physician Network Heart and Vascular Care, Sarada Uppuluri, MD, specializing in cardiology, to discuss results and next steps.

In September of 2015, Nicole’s results showed the aneurysm had grown to more than five centimeters in size. To prevent dissection, the doctors determined she would need surgery to repair the aneurysm and to either repair or replace the valve that had also become damaged.

Nicole felt strongly about having the valve repaired instead of replaced. With the help of Dr. Uppuluri and her nurse Dot, Nicole became a patient of Dr. Lars Svensson, Institute Chair and Thoracic/Cardiovascular surgeon at Cleveland Clinic—where her father had undergone the same surgery years before.

On October 22, 2015, Nicole had open heart surgery. Following the procedure, she underwent cardiac rehabilitation at Community Heart and Vascular Hospital for four weeks, followed by additional rehab at home.

“Dr. Uppuluri and her nurse Dot are a huge part of why I am alive today,” she said.

She was feeling stronger with each passing day and was excited about new opportunities to share her story and inspire others. However, toward the end of March, Nicole found a lump in her left breast.

Upon returning from a family vacation, she made an appointment with her OB/GYN who recommended she have a mammogram at Community Breast Care South. It was scheduled for the following day. Because it didn’t seem that worrisome, Nicole went to the appointment alone. The mammogram was followed by an ultrasound. After which, she was informed she would need a same-day biopsy. Her family was called to meet her.

On April 13, the results confirmed what Nicole was so afraid of. The one lump was actually two. She had breast cancer.

“I felt pure and utter devastation,” said Nicole. “I could not believe God would give this to me after everything else.”

Nicole was referred to Chase Lottich, MD, an MD Anderson Cancer Network® physician specializing in breast surgery. At their first appointment, Dr. Lottich presented Nicole with a plan, which helped put her and her husband at ease with what was to come.

Nicole then met with Mary L. Mayer, MD, an MD Anderson Cancer Network® certified physician specializing in medical oncology. She began chemotherapy treatment in May, enduring multiple rounds until finishing on August 17. In September, she underwent a double mastectomy, removing the cancer from her body that had appeared, despite the fact that she has no family history of breast cancer and does not carry the BRCA gene.

Nicole credits the unwavering support of Community’s caregivers for helping her through the last eleven months.

“We are so absolutely impressed with the care Community Health Network gave me,” Nicole said. “I haven’t met one doctor or nurse with whom I haven’t felt comfortable.”

The former educator refers often to the children’s book she wrote and that was later published by the Indianapolis Business Journal in 2012. Titled There’s SomeTHING in My Basement, the book offers tips for young readers dealing with fear and for parents to help their children face fear head on.

“No fear is too great to overcome,” Nicole said—words that have almost certainly taken on a whole new meaning for this determined cancer fighter. Nicole is hopeful that her book and her personal story will inspire others to overcome some of their own fears.

Through it all, Nicole continues to radiate a love for life and a positive attitude. “It’s hard—we can laugh or we can cry. We choose to laugh,” she said. “I am so very thankful for the love and support we have received from Community Health Network. I consider everyone we’ve come into contact with family and look forward to giving back in some way soon!”