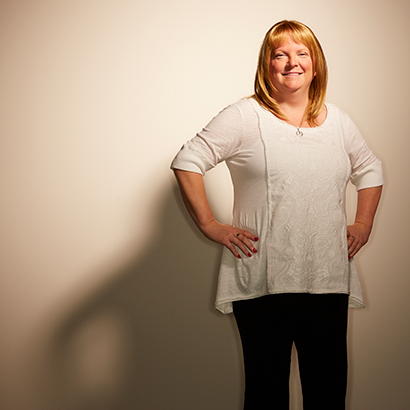 All of a sudden, I’ve got cancer. I realized just how precious life is and how quickly things can change.

Monica had undergone a colposcopy four years in a row after experiencing abnormal test results through her OB/GYN. She had no symptoms, but she wanted a hysterectomy to help eliminate the need for these tests each year.

During an ultrasound in October of 2015 leading up to surgery, a cyst was found on her left ovary. It was malignant, and Monica was diagnosed with Stage I ovarian cancer.

“I was really lucky,” Monica said of the diagnosis, as too often ovarian cancer is not diagnosed until later stages.

In November, she underwent a hysterectomy under the care of Wafic ElMasri, MD, specializing in gynecologic oncology at Community at the time. A few weeks later, she began chemotherapy, receiving treatment every Wednesday until late April of 2016. From her surgery until the holiday season, she took off work from her job as a nurse practitioner focused on geriatrics. After that, she was back to work full-time.

Monica had few family members in town, so her friends stepped in to support her.

“Two of my best friends went through most of this with me,” she said. “They were my rock.”

At the end of chemotherapy, Monica’s test results came back clear for cancer. She visits Dr. Bedano every three months for follow-up appointments and tests.

“For something no one wants to deal with, it’s been good,” she said. “It changed my perspective on life. Boom. All of a sudden, I’ve got cancer. I realized just how precious life is and how quickly things can change.”

In addition to her outlook changing, Monica is also planning to volunteer in oncology to support fellow cancer patients as they battle the disease.

When she was first approached about participating in Faces of The Giving Gig 2017, she was shocked and honored simultaneously. Yet she knew the purpose of the annual event was to support cancer patients in financial trouble, and she couldn’t think of a better way to give back.

“Cancer is an overwhelming situation,” she said. “It affects every body system you have, and your whole life routine changes. On top of all of that, for those having to worry about the financial piece of it—how to keep going and put food on the table…I knew I wanted to do my part to help.”