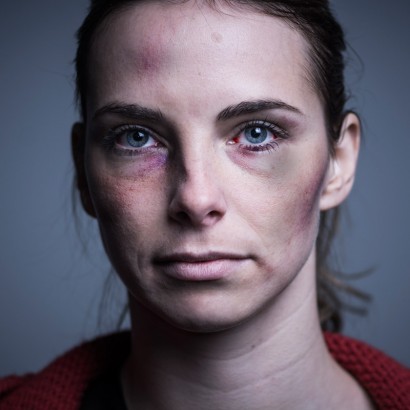 So much is compromised so quickly. If a forensic nurse hadn’t been there that day, I don’t know what I would have done.

Around 7:00 on a Monday morning in October of 2012, Mandy’s husband hurriedly drove her to Community Hospital East. Mandy, a night shift nurse at Community East, had left work only an hour and a half earlier. Yet, what had transpired since then felt as though it had lasted days, even weeks.

She had returned home to find her husband in the shower getting ready for work. Mandy greeted him and then went to take out the garbage—it was trash day—before planning to catch up on some sleep. Still in her scrubs, she went to get the trash can where it was kept beside their Irvington home, but when she turned around a man stood in her path, pointing a gun in her direction.

Instinctively, Mandy screamed. The man threatened to kill her and anyone else inside her home if she made another noise. Mandy, terrified, obliged. He grabbed her wrist and pulled her through the neighborhood, weaving through backyards before ending up in an area behind a group of garages.

There, the man raped and beat her. Somehow, she convinced him to let her live. He told her to run away in a specific zigzag pattern and not to look back. She did, sprinting to a nearby construction site and hiding beneath a truck, concerned he might have changed his mind and followed her.

Minutes passed. She heard the squeal of tires and peered out to see a car—her car, with her husband behind the wheel. While in the shower, he had heard Mandy scream and had gone outside, noticed the trash can was overturned and that Mandy was nowhere to be found and immediately began driving around the neighborhood trying to find her.

Mandy crawled out from under the construction truck and ran to the car. Crying, she told him to take her to Community East.

Mandy and her husband went to the emergency department before being connected to Tamera, a forensic nurse examiner at Community East’s Center of Hope, one of several locations around Central Indiana that specialize in providing medical care to victims of violence, abuse and sexual assault. To work as a Center of Hope nurse, one must complete an intensive and extensive 150 hours of training focused on how to provide a forensic consultation and collect evidence that can be used in court.

Tamera documented Mandy’s narrative of what took place during the assault, and she helped her notify law enforcement. She collected Mandy’s clothes and gave her new ones. Her injuries were documented in detail, with photographs and measurements taken of each bruise and scrape and swabs taken for DNA testing. She was given a number of medications including antibiotics to prevent the transmission of sexually transmitted disease and HIV prevention drugs that cost upwards of $3,000—now offered free of charge to Center of Hope patients thanks to donors of Community Health Network Foundation.

Tamera was meticulous, yet compassionate, and explained what she was doing every step of the way to Mandy and her husband, who was in the room with her. In whole, the examination lasted five hours.

“The way Tamera explained everything to us was so respectful,” Mandy said. “She didn’t make me feel like I needed to be a strong person. I didn’t feel rushed. If I became upset, she never pushed. She would ask if I wanted to do each part of the exam and made clear I always had a choice, but I didn’t say no to any of it because I knew it could be used to find the perpetrator.”

The Center of Hope connected her with a therapist and additional community resources to help begin the healing process. The collected evidence was shared with the police, and Mandy participated in a taped interview to document her side of the story.

“You have to recap it for what seems like 1,000 times,” she said. “You feel like everyone knows what’s happened even if they don’t really know. You feel so exposed.”

While they waited for the evidence to be processed, Mandy and her husband returned home and tried to heal.

“I tried to act normal,” said Mandy, who found it difficult to return to work full time. “I wish it had happened in a parking garage or some public place. When something happens like that at your home, you never feel safe again. I was constantly in fear. If my husband was asleep, then I needed to be awake. I wouldn’t let our dogs outside if my husband wasn’t home. I obsessively checked the locks on our windows and doors.”

Weeks after the assault, Mandy received a call while at work. The evidence Tamera had collected had been processed, and there was a match in the system to a man with a prior felony. The police wanted Mandy to look at mugshots and confirm it was him. Her colleague, a charge nurse at Community, sat with her as the detectives showed her the photos. Mandy immediately recognized him, confirming what the evidence had matched in the system.

Charges were filed, and a trial date was set. If the trial happened, Tamera would serve as an expert witness to assist the prosecution. Mandy prepared to go to court and to face the man who so brutally raped her. Her attorney had offered a plea bargain of 70 years in prison—they weren’t about to let him off easily. Yet days went by, and they thought a trial would be inevitable. Finally, three days before the trial was set to begin, the culprit accepted the deal.

“If Tamera hadn’t been there to collect that evidence, he’d likely still be out there,” said Mandy, who has since started a family with her husband.

“So much is compromised so quickly. If a forensic nurse hadn’t been there that day, I don’t know what I would have done,” she said as she considered the limited trained staff and availability for forensic consults the Center of Hope is working to overcome. “It would have been really terrible—I wouldn’t have waited six hours or come back the next day. It just makes you wonder, how many more people would be caught if someone were available all the time?”

Forensic patient volumes at the Center of Hope continue to grow. Sadly, we know some patients do not receive the forensic consults they need upon entering Community for care. There are additional victims we could be serving; however, with limited trained staff and availability for consults, we will continue to miss opportunities to do so, further perpetuating this cycle of abuse for too many of our neighbors in need.

Your support can help Community grow is forensic nursing team in order to offer more life-changing care at all hours of the day to victims of violence, abuse or sexual assault. Each day brings a new opportunity for hope and healing—will you take a stand and help us work to break the cycle of abuse?

Center of Hope
Since 1998, the Center of Hope at Community Health Network has been dedicated to caring for victims of violence, abuse or neglect, especially sexual assault and interpersonal violence.
Learn More