COVID-19 Testing: If you have a primary care provider, call the office for testing questions and next steps. Testing at Community drive-thru tents is ONLY available with a provider order (see tent testing information). COVID-19 testing is available at MedChecks and Community Clinic at Walgreens during scheduled visits as part of an evaluation (walk-ins not accepted).

COVID-19 Vaccine: See our COVID-19 vaccine FAQ for updates on vaccine availability for patients and caregivers. 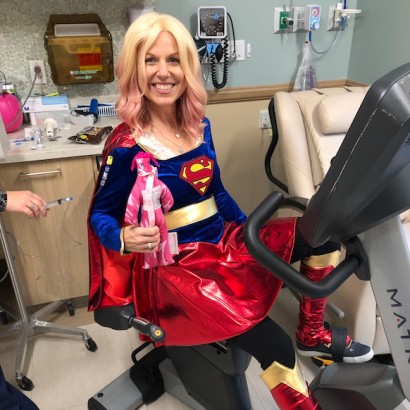 “This is my opportunity to live the most fulfilling and meaningful life that I possibly can. And it starts with my mindset. It starts with my drive and motivation to live fully, regardless of whatever diagnosis I’ve been given. I think that’s so important for any chronic disease.”

Kim was always the picture of health, never having symptoms indicating she was sick. In August of 2018 she went in for her annual visit with primary care provider Elena Burtea, MD, and was reminded that her mammogram was due. Her physician performed a breast exam with no concerns. Kim went about her normal routine and scheduled a 3D mammogram for the following week.

Shortly after the appointment, she received a call. Something had changed and the radiologist would like for her to come back in.

“I’ll never forget the words. We were sitting in a room together, and he didn’t tell me I had cancer, but he said ‘We have some good news and some bad news. We do see something, and it looks like calcification on your left side. But the good news is that 70 percent of the time, this is non-cancerous and benign.’”

Within a week and a half, she’d had a biopsy and her results indicated that she was in the 30 percent. Kim had breast cancer.

Her initial diagnosis suggested very early stages and she met with Christina Kim, MD. “She explained how everything worked, how breast cancer comes about. She, too, thought at that point it looked to be very early stages.” Kim’s care team wanted to run further testing.

When those results came back, they showed a more aggressive form of cancer. “We went forward right away with a bi-lateral mastectomy.”

The Shift to Survivorship

“I had never missed a mammogram since I turned 40. It was mind-boggling, to say the least, when I saw how my previous scans looked completely clear. My 2018 scan, I would describe it as though it looked like I had a nuclear bomb had gone off in my left breast. And I literally felt nothing. I didn’t feel a lump.”

During her mastectomy, her surgeons removed all eight lymph nodes. At the same time, Kim’s reconstruction team led by Eugene Hsiao, MD, placed tissue expanders since the breast tissue had been removed on both sides.

Kim found a lot of great resources through Community, but one of her favorites was the integrative oncology group at Community North. Kim began to meet with Young K. Park, DO to help her understand how integrative care could subside some of the side effects she was going to experience, apart from the more conventional methods of treatment.

Kim worked closely with her oncologist, Sumeet Bhatia, MD, as well. Dr. Bhatia helped her understand how chemotherapy was imperative for her treatment plan. The chemotherapy was needed to kill any additional cancer cells that could be remaining. Kim went through her chemo and then completed a comprehensive radiation plan.

During her treatments, Kim chose to stay active. While receiving chemotherapy, Community Cancer Center North provides a stationary bicycle for patients to ride instead of sitting for hours. She took advantage of that and many other resources to stay in excellent physical health throughout treatment. Kim practiced hot yoga, cupping and acupuncture before and after chemo treatments. She was also able to take advantage of the complimentary massage service at the cancer center. "Self-care is such an important part of life and that became so much more apparent while going through treatment."

“Here’s what I’ve learned: This is really not about having cancer. This is my opportunity to live the most fulfilling and meaningful life that I possibly can. And it starts with my mindset. It starts with my drive and motivation to live fully, regardless of whatever diagnosis I’ve been given. I think that’s so important for any chronic disease. We all have the ability to control what we’re thinking, and those thoughts become a reality.”

While finishing treatment, Kim began to learn more about nutrition. “Food is medicine, and it can help prevent and get your body back on track if you allow yourself to eat whole foods, fruits, vegetables, and cut out the sugar and processed junk.”

Her real mission in life now is to help people recognize that there’s a better way to live.