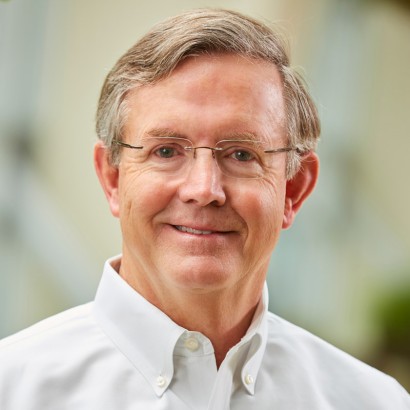 I truly believe we had a team that benefited not only the many Rollins Construction employees and Community’s work, but also one that helped to improve facilities for the staff and millions of patients who entered Community.

In 1977, Garry Rollins and his father H.E. “Whitey” Rollins founded Rollins Construction Company. That same year, Whitey suffered a heart attack. He was rushed to Community Hospital East, where he was treated and began rehabilitation therapy.

In these moments, Garry and his family were devastated and worried about the worst that might happen to his father.

While riding a stationary bicycle in rehab, Whitey happened to meet a fellow patient who also was an employee of Community Health Network. The two began talking and Whitey learned about Community’s process for construction projects.

At the time, Rollins Construction was mainly handling commercial and warehouse construction. Garry was enthused by the idea of entering healthcare construction, and so he submitted a proposal to secure a position on Community’s bidding list. He was denied twice before his perseverance paid off, and he succeeded on his third attempt.

In March of 1978, Rollins Constructions began his first job for Community—ironically in the cardiac department—completing the first open heart surgery room at Community East.

As the family company’s reputation grew stronger, so too did their relationship with Community. Garry calls it “truly a team effort.” He and his team at Rollins enjoyed working with their counterparts at Community, enabling their business partnership to thrive but also building friendships that still exist today.

In retrospect, Garry credits his father’s heart attack, which at the time seemed like the worst thing that could have happened, as being one of the best things to happen to his family. Without it and his chance meeting in rehab, Garry and his father could not have built the relationships they did with Community.

“I truly believe we had a team that benefited not only the many Rollins Construction employees and Community’s work, but also one that helped to improve facilities for the staff and millions of patients who entered Community,” Garry said. “God has a plan. We cannot always see it, but that one event has taught me that things are never as bad as they seem and there just might be a reason why things happen as they do. It’s up to us to remain faithful, keep working and look for the good.”

In 2011, Whitey was diagnosed with lung cancer. Familiar with Community’s high standards of care, he underwent treatments at Community Cancer Center North. Yet, after his second radiation treatment, his heart began to fail. He was admitted to Community Hospital North, but his health continued to decline. One week after being moved to hospice care, sadly Whitey passed away.

In those final days with his father, Garry remembers being overwhelmed by the level of care Community employees offered. One nurse in particular had noticed that his father’s face was in need of a shave. So she lathered him up and made sure he was cleanly shaven—treating him as a person, not just a patient.

“They made his last days on Earth so much better,” Garry said. “The way that nurse interacted with him went above and beyond personal care. She had been hired and trained to give that kind of service.”

Garry and his wife have prioritized philanthropy within their family, and their generosity has in turn benefited Community patients and their families.

Deeply involved in their faith, the Rollins have played a role in developing chapel space on Community’s campuses. In fact, their first gift to Community was in support of a chapel at Community East. From a professional standpoint, Rollins Construction helped to add a chapel to the design of Community Heart and Vascular Hospital, and, in their work to renovate Community North’s interior, a chapel was included in the design from the start. 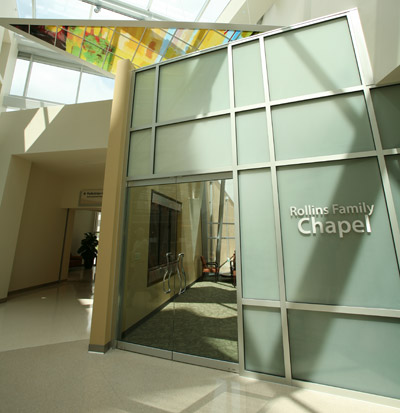 The epitome of humility, Garry makes clear it was never his intention to have his name on what is now the Rollins Family Chapel at Community North. Yet, looking back on the decision to do so, he notes how it has given him countless opportunities to discuss his faith with others. He recounts the calls he has received from friends saying they spent time in the chapel praying for loved ones, something he says happens a lot, and it’s clear his family’s gift that made it possible is hugely meaningful to him.

While his donations to Community have continued to grow over the years, it’s not something Garry touts in conversation or even in this interview. Instead, his focus remains on the direct impact his support can have on the people in this community he holds so dear.

While retired today, Garry continues to be impacted by Community. His three grandchildren were born at Community hospitals, and he stays active by volunteering for a number of organizations including Camp Erin Indianapolis, a weekend-long camp for children who are grieving a loss offered thanks to support of Community Health Network Foundation.

As life takes him down new roads, he’ll never be far from Community. In fact, recently, he and his wife looked into moving from their home of nearly 20 years. In the end, they opted not to in order to remain close to two places—their church and Community North.

To Garry, Community is a place that holds deeper meaning than simply a construction site. Instead, he can see the non-profit health system for what it was nearly 40 years ago and how it has grown to what it is today. Professionally, it’s a place he has helped expand, to better serve families across Central Indiana. Personally, it ties him to some of his most memorable moments—from the greatest joys to the saddest goodbyes. In sum, Community is a place that has earned his trust, and, through his generosity, where he has and will continue to put his faith when the need for care arises.