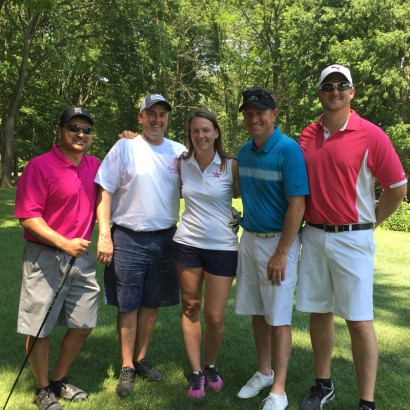 It’s difficult to just go back to normal life after something like this. Swinging Fore a Cause gave us another focus instead of dwelling on the past, and it pushed us to go forward because we knew we had other people to help.

In the summer of 2001, Courtney Larson was in Community Hospital North’s maternity department on bedrest. During this stressful time, Courtney saw Community’s nurses in action, offering exceptional care to the patients in their care.

“It was at that point when I recognized something special about Community,” she said.

Her babies were delivered at 31 weeks and spent five weeks in Community North’s Neonatal Intensive Care Unit (NICU). She continued to be inspired and in awe of the care she and her family received.

“One of the nurses I encountered told me I should work here at Community,” she said.

In 2002, Courtney began working at Community Health Network as an OB Tech. She also began to consider going back to school to become a Registered Nurse.

Her children grew and thrived. When they entered first grade in 2009, Courtney entered nursing school and graduated in July of 2011 with her degree. She began working in Community North’s maternity department—where she had first encountered the care that inspired her to go to school in the first place – and was excited about the future.

In February of 2012, Courtney found a lump in her breast. Her primary care physician sent her for a mammogram with Erin Zusan, MD, an MD Anderson Cancer Network® certified physician specializing in breast surgical oncology. In the same appointment, Dr. Zusan completed an ultrasound and biopsy, which suggested that Courtney had breast cancer. Courtney was connected that same day to a nurse navigator—a breast cancer survivor herself—to be her guide throughout the process.

The following day, Courtney learned she indeed had breast cancer. Dr. Zusan scheduled an early afternoon meeting with Courtney and her husband Scott, her parents, one of her brothers and her in-laws. In that meeting, mere hours after her diagnosis, Courtney felt like they already had a plan of attack.

“Everything was set in place,” she said. “I didn’t have to go home and make any follow-up phone calls or wonder what happened next.”

A few weeks later, Courtney’s port was inserted. She had a lymph node biopsy to check to see if the cancer had spread, and she began chemotherapy. In total, she underwent six rounds of chemo; halfway through treatment, an ultrasound showed the cancer had significantly reduced in size. She eventually underwent surgery and then radiation for five days a week over the course of six weeks.

Throughout it all, Courtney continued to work when she could and felt supported and valued by her supervisor. And she was again blown away by the level of care she received as a patient.

“This isn’t just their day-to-day work,” she said of Community’s cancer care teams. “They understand this is traumatic and they do everything in their power to make it less intimidating.”

During the process of radiation, Courtney awoke suddenly one night from a dream in which she was helping others.

“I remember thinking I’m halfway through radiation, but someone else is being diagnosed today,” she said. She woke up her husband Scott and shared her idea to give back.

At the time, her husband worked in the golf business. In fact, Courtney had worked at a golf course, and that is where they first met. She immediately thought to do a golf outing and told her nurse navigator about what she was planning.

Her nurse navigator connected Courtney with Community Health Network Foundation, which helps guide third-party fundraising efforts, and the idea took off. They called it Swinging Fore a Cause, with funds benefiting uninsured or under-insured women being treated for breast cancer at Community.

With an original goal of raising $7,000 in the first year, Courtney and her husband far surpassed it—raising more than $20,000 thanks to the generosity of many including family, friends and Community caregivers.

Courtney’s passion to give back has helped women in a variety of ways. For example, Community’s care teams learned a woman fighting breast cancer was sleeping on a moldy mattress that was making her sick. Funds raised through Swinging Fore a Cause allowed Community’s caregivers to offer her a brand new mattress set to resolve the situation.

“I feel very blessed,” she said. “Not everyone has my same circumstances. This was a great way to support others while also saying thank you to my doctors, nurses and care teams overall.”

Giving back to help others was fulfilling in a number of ways for Courtney, Scott and their family.

“This effort helped our family mentally and emotionally,” she explained. “It’s difficult to just go back to normal life after something like this. It gave us another focus instead of dwelling on the past, and it pushed us to go forward because we knew we had other people to help.”

In 2016, Swinging Fore a Cause entered its fourth and final year, rounding out a tremendously impressive effort that culminated in more than $100,000 raised for Community’s breast cancer patients.

February of 2017 marked five years since Courtney’s diagnosis. Today, she is cancer-free, offers compassionate care as a nurse at Community and has established the Larson Family and Friends endowment so that generous members of the community can continue to support women who need it for years to come.

How can you help?

Your support can help Community Health Network Foundation continue to assist women who have been diagnosed with cancer. The Oncology Patient Assistance Fund - which offers $250 vouchers to cancer patients with financial needs - is just one way that the Foundation helps alleviate financial challenges for our cancer patients.