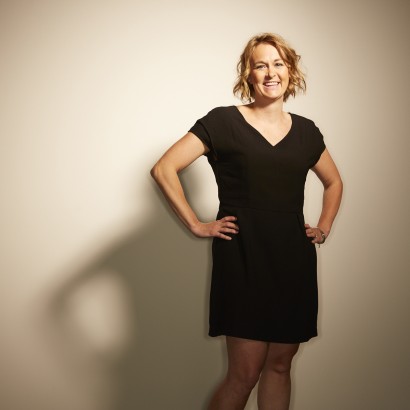 I got my diagnosis on the day we closed on a new home. Instantly, life shifted from moving to beating cancer.

Toward the end of 2015, the 35-year-old mother discovered a lump in her breast during a self-exam. Amie made an appointment with her OB/GYN the following Monday. There, her physician recommended a mammogram.

Concerned, but not overly so, Amie went to Community Hospital North alone for the mammogram as well as an ultrasound. Yet the results weren’t what she hoped for—and suddenly she was being told that a biopsy was recommended that same day.

At this point, Amie was shaken and upset. Her husband joined her at Community North for the biopsy, and the test results were expedited. The next day, Amie received the call that she had cancer.

She was able to make a consult appointment before the weekend with Nate Thepjatri, MD, an MD Anderson Cancer Network® certified physician specializing in breast surgical oncology. Dr. Thepjatri and Betsy Lynn, a nurse navigator who would serve as Amie’s guide throughout her cancer treatment, took the time to draw pictures of what her body was battling and thoroughly explain her options to take action.

“I can’t say enough positive things about the experience overall,” said Amie, who closed on a new house with her husband the same day as her diagnosis. “They made sure I wasn’t doing a lot of waiting for results.”

Amie had experienced some changes in vision, so a PET scan and brain MRI were ordered. Those tests, out of them all, were the scariest for Amie.

Soon after the scans, Amie had an appointment with Sumeet Bhatia, MD, an MD Anderson Cancer Network® certified physician specializing in medical oncology. Knowing his patient would first and foremost want to know the results of her scan and MRI, he announced the news immediately upon entering the exam room—“Scans are clear,” he said.

Amie and her husband were relieved by this news, which eliminated another health concern, and a double mastectomy was scheduled for five weeks after her diagnosis.

Test results following surgery showed that Amie’s cancer was slow growing and one of the least aggressive forms. She had had nine lymph nodes removed and tested, but the results all returned clear.

In late January of 2016, Amie began six weeks of radiation treatment under the care of Daniel Weed, MD, an MD Anderson Cancer Network® certified physician specializing in radiation oncology. She finished treatment in March. During the whole experience, she was blown away by the care she received.

“Throughout it all, neither my husband nor I felt like we needed a second opinion,” said Amie. “We always knew we were in the right place for me and every single doctor and nurse we worked with reaffirmed that belief.”

And Amie was touched by the generosity of others, which has inspired her to give back.

“I saw so much good out of all of it, which helped me to stay positive,” she said. “Now that I’m through it, I’m honored to give back as part of Faces of The Giving Gig. If my story can help someone else, why wouldn’t I share it?”

And now, because of her personal experience, she has become an advocate of breast self-exams. She posts often on social media sharing about her journey and the importance of knowing your body, and she has received countless messages thanking her for her efforts to raise awareness of breast cancer and its early detection.