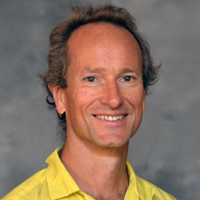 Tom was raised in a large family in northwest Indiana whose values emphasized cheering for the underdog and helping the underserved. He received his bachelor degree at Indiana University and medical degree from Michigan State University. He completed his residency in family medicine at Community Hospitals and an ethics fellowship at IU. He met his wife, also a family doctor, in college at summer camp for handicapped children.

The strong influences of family, education and mentors has lead them to the path of working with the underserved in Indianapolis, Kenya, and in multiple community health centers. He tries to pass forward his passion for care of marginalized populations through medical education. His practice currently focuses on end of life care - helping patients and families find peace in transition.

He has four children: a writer, boat builder, OB/GYN and entomologist. He enjoys being outside, working with wood and serving on non-profit boards. 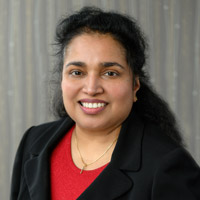 Dr. Evelyn Bose graduated in 1988 from Madras Medical College in India, the third oldest medical school in Asia, and specialized in women’s health. She has worked with very prominent non-profit missionaries and pioneered many projects which have grown to be full-fledged organizations caring for the vulnerable. Her dad worked with leprosy patients in remote Nigeria while she was in boarding school. In her youth, her vacations were spent in Africa watching leprosy patients being treated.

After she completed her residency in family medicine in Indiana, she served the geriatric population in nursing home communities in Evansville. There, she was chosen as the best geriatric physician by the local newspaper. She also received awards from AMDA, American Medical Director Association, for exceptional medical direction at a national level.

Prior to joining Community, she held leadership roles in post-acute care settings, caring for the sickest patients. Her passion is to provide hope when caring for seriously ill patients. She enjoys taking care of one patient at a time, helping them navigate while living a high quality of life. In addition to her current role as a palliative care physician, she has held roles in teaching, leadership, skilled nursing rehab, outpatient, inpatient and hospice care.

Evelyn enjoys playing the piano, singing, cooking, and encouraging her family in their careers. She has two adult children and is married to a physician. 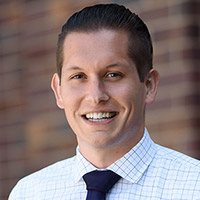 In his spare time, he enjoys playing basketball and spending time with his wife and daughter. 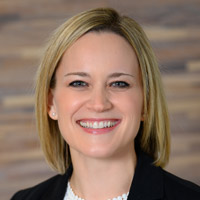 Molly became the director of specialty clinical services at Community Health Network within the post-acute product line in June 2020. Molly brings more than 12 years of healthcare experience to this role. She works closely with executive leadership, medical staff, employees and the public to support Community Health Network’s mission, vision and values in promoting the development of a leading geriatric and palliative care model.

Molly received her bachelor of arts degree in gerontology from Miami University in Oxford, OH. She then entered a three-year program at Yale School of Nursing in New Haven, CT, to obtain her RN and master’s degree in nursing. Molly’s nursing career has always been focused on the care and well-being of older adults, spanning a variety of healthcare settings including inpatient care at Yale New Haven Hospital, Housecalls for Seniors and the GRACE/Bridge program at Eskenazi Health, and the HATS clinic and GEM/NICHE program at Community Health Network.

Molly and her husband, Noll, are the proud parents of two children. 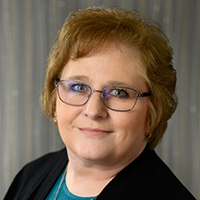 During her free time she enjoys swimming, reading and her grandchildren.

She is board certified as an acute care nurse practitioner and also board certified in hospice and palliative care. Previously, she has worked as a neuro/medical-surgical nurse, a medical social worker, and an Army medic.

She enjoys running, cooking, and traveling. Julie, her husband, and their six dogs live on a small sheep farm in central Indiana. 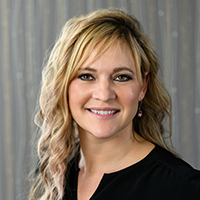 Melisa began working at Community Health Network in 2018. She received her nursing degree at Ball State University and then began her nursing career in Charlotte, NC. Melissa then pursued her master of science in nursing after working in cardiology to become a family nurse practitioner (FNP), and worked with patients in family practice, cardiology and geriatrics. She enjoys working with patients with chronic conditions.

Abi is ecstatic to continue her work in the palliative care and hospice setting with Community Health Network. Her passion is to help support patients and families living with serious illness achieve their goals and focus on comfort to allow for quality days.

Rosemary is a nurse practitioner and clinical nurse specialist. She has been a part of the palliative care team since 2013. Rosemary has a bachelor of arts degree in creative writing and literature, a bachelor of science in nursing, a master's degree in nursing education, and post-master's certificates as a psychiatric nurse specialist and nurse practitioner.

Rosemary has three board certifications: One as a psychiatric clinical nurse specialist, one as a psychiatric nurse practitioner and one in hospice and palliative care. Rosemary has a straight forward, "keeping it real" approach and believes that trust is a very crucial part of the relationship between a patient and provider.

She is a life-long learner and is currently a graduate student in the Butler University MFA Creative Writing Program, specializing in poetry. She has over 30 published poems and is the author of a book for children. Rosemary is married and has seven children. She enjoys poetry, gardening, painting and spending time with her family.

Matt attended New York University and graduated with his bachelor degree in nursing after devoting 12 years to pursuing an acting career. After a year and a half of working as a home care and hospice nurse, he moved back to his home state of Indiana in 2014 where he began working for Community Health Network in the home care program. Shortly after joining Community, he transitioned to a home hospice role where he worked until joining the palliative care team in October 2016 as the weekend triage RN. In 2020, Matt graduated from the University of Indianapolis with his master's of science in nursing. He brings with him seven years of experience in hospice and palliative care and is happy to be working as a nurse practitioner with the palliative care team.

Jaswinder grew up in India and moved to the United States in 2008. She has her associate degree in nursing from India and started her career as a registered nurse in a long-term care facility. She then graduated from Indiana University Purdue University Indianapolis with a bachelor of science in nursing and a master’s degree in nursing. She is board certified as an adult gerontology nurse practitioner. Before joining the palliative care team she worked as a nurse in a long-term care facility, as well as on neuro med-surgical and progressive care units.

She is married, has two boys and lives in Indianapolis. She enjoys cooking, reading and spending time with her family.

She has been with Community Health Network since 2015 and with the palliative care team since 2018.

She enjoys spending time outdoors with her family, friends and fur babies. 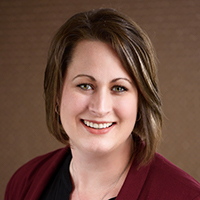 Kay Ellen is a palliative care nurse practitioner. She graduated from Indiana Wesleyan University with both her bachelor of science in nursing and later in 2018 with her master of science in nursing in family practice. Her experience includes working in acute care hospitals and specifically with oncology and hospice patients.

She considers it a privilege to help patients and families at such a vulnerable time in their lives. She approaches each patient and family conversation with compassion, attentiveness and respect. She wants to learn how best to become an advocate for you or your loved one. Let her and the palliative care team assist with difficult conversations on planning for end of life, advanced directive paperwork, or life goal setting.

Kay Ellen enjoys drinking coffee and finding new brunch restaurants. She fills her time cooking, traveling to the beach, and exploring with her husband and family. 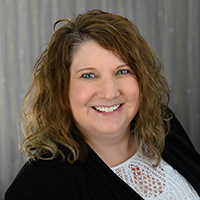 Shelly began her nursing career with a bachelor of science in nursing from Indiana University in 1991. After spending nearly 10 years at bedside in cardiac care environments in Indiana and Florida, Shelly joined the faculty team of St. Elizabeth School of Nursing and St. Joseph College. This consortium program provided both a nursing program diploma and BSN degree for graduates. While serving for nine years as assistant professor, she taught pathophysiology, pharmacology, advanced med-surg, and grief/loss subject material with clinicals in an acuity-adaptable cardiac critical/progressive care unit. Shelly finished her master’s degree in nursing leadership with a focus on education in 2006 with Ball State University. She quickly pursued her nurse educator certification, earning this title in 2008.

Shelly joined the Community Howard Regional Health team in 2016 as a regional education specialist. As she brought the department to alignment with Community Health Network, she began pursuing her post-master’s family nurse practitioner (FNP) certification program through the University of Southern Indiana. She completed her FNP education in July 2019, then quickly obtained the position of her dreams, joining the palliative care team with service to the inpatient and outpatient populations in the Community North region.

Shelly shares her home with her bossy miniature schnauzer, Andi. Her daughter is completing her academic studies in southern Ohio. She enjoys her quiet home while she renovates, landscapes, fishes and camps. Shelly volunteers annually as a camp nurse with Community’s sponsored grief camp for children.

Nicole completed her undergraduate degree from Indiana University in 2010. In 2012 she graduated from St. Francis University through the Physician Assistant Science program. She joined Community Health Network in 2012 with pulmonary and critical care medicine. Additionally, she spent two years with Kosair Children's Hospital in Louisville, KY, now Norton Children’s Hospital, as a physician assistant in hematology, oncology and bone marrow transplant.

She enjoys spending time with her husband, three young children, family and friends.

Pam earned her associate of science degree in nursing from Mt. San Jacinto College in Menifee California in 1997. She worked as an RN in cardiac care and ICU, and then found her place in hospice and palliative care. Pam worked as a hospice RN for 20 years, 15 of those with Community Health Network’s hospice program before joining the palliative care team in 2019.

Pam enjoys being a part of an interdisciplinary team to help meet the patient’s physical, psycho-social and spiritual needs. Pam’s passion in nursing is expressed best when she can help patients and family members find peace and comfort in their difficult situations, to help maintain quality of life.

Erika is engaged to be married next year, and she and her fiancé have a dog and a cat. She enjoys spending her spare time with family and friends, taking her dog to the dog park, and cheering on IU basketball. Go Hoosiers!

Mandi graduated from Kaplan College in 2013. She joined the Community palliative care team in 2019. Currently, she is attending Ivy Tech College to achieve her associate degree in nursing.

Mandi is married with four children. In her free time she loves attending her children’s sporting events, as well as enjoying quality time with her family.

She and her husband have two adult children and have been married for 20 years. She enjoys traveling, reading and spending time with the most important people in her life.