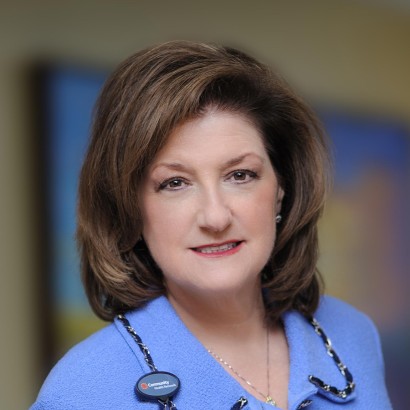 Joyce became Community Health Network Foundation’s president and CEO in October 2012. In this leadership role, she leads a fundraising team and board of directors charged with raising financial support that enhances patient care delivered at more than 200 Central Indiana sites of care. She aligns giving priorities with the future goals of Community Health Network, ensuring that donations are used to support the strategic growth of our non-profit healthcare organization.

She was born and raised in Seymour, Indiana, where most of her family still lives. At the age of 8, she contracted meningitis, was hospitalized at Riley Children’s Hospital and not expected to live. She beat the odds and developed a love of healthcare and dedication for giving back that has defined her career. She says her role at Community is the fulfillment of those two passions.

Joyce has dedicated more than 25 years of her career to health care. Prior to her appointment at Community, she worked at Roche Diagnostics Corporation for 10 years, serving as the national director of state government affairs. Prior to working at Roche, Joyce worked at Eli Lilly on federal policy issues and strategic marketing relating to importation and Medicare Modernization Act. Her career has includes other senior-level healthcare positions, where she worked in managed care organizations, large multi-specialty physician groups and large integrated hospital systems.

As a volunteer, Joyce is committed to making our Central Indiana communities healthier places, and to creating opportunities for women to succeed. She serves on the Indy Chamber and Employ Indy board of directors, and is a member of the U.S. Global Leadership Coalition and the Central Indiana Corporate Partnership (CICP) for Workforce Development Steering Committee. She has also lent her leadership to many non-profits, including the American Heart Association, Women in Government, the Lugar Series for Public Service Series, Marion County Health and Hospital Corporation, Indianapolis Symphony Orchestra, Crossroads Rehabilitation Center and Fairbanks Hospital.

In 2014, the State of Indiana and its Commission for Women presented her with a Torchbearer Lifetime Achievement award, recognizing her for the impacts she has made in Indiana. She has received the Sagamore of the Wabash Award from Indiana Governor Robert D. Orr and the Outstanding Volunteer Award from former United States President George W. Bush.

She is a two-time graduate of Indiana University, earning a bachelor of science and a master of science from her alma mater. Joyce’s husband, Marty, is senior tech advisor for PQR Energy. Together, they have two Shelties and one cat.

Joyce grew up in a very musical family and also studied voice at IU. She has had the opportunity to sing at several presidential events and Indiana inaugural ceremonies. She has even experienced the excitement of landing on a Navy aircraft carrier at sea.