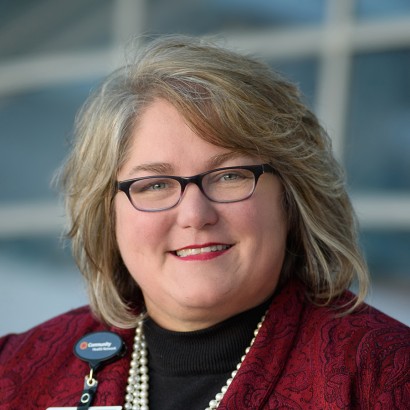 Carla became Community Health Network Foundation’s manager of grants and compliance in January 2016. In this role, she provides pre- and post-award grants administration and financial analyst support for the network. She also works closely with the director of grants and compliance, Community Health Network physicians and staff.

Carla began a career in healthcare 25 years ago when she became a radiation therapist. Her fascination with radiation and her desire to bring healing to people are what drove her to pursue that career. Since then, she has continued to be involved in healthcare, whether as a practitioner, in higher education or through non-profit healthcare advocacy work.

Carla has been working in philanthropy and research grant writing for 10 years. Prior to coming to Community, she led the Literacy League of Craighead County in Arkansas as well as CASA of the 2nd Judicial District, where she served as the executive director. Prior to working at the Literacy League she was a research development specialist for Arkansas State University assisting faculty with grant-funded research proposals.

As a volunteer, Carla has founded two non-profit organizations that meet the needs of the community. She began by founding Powerhouse Ministries, a youth outreach program that gives teenagers positive options for the weekends in Arkansas. This program helped launch a low-power radio station that is still in use today. Her most recent non-profit endeavor has been a cultural and performing arts organization that she founded for children in rural Missouri who have no access to music or the arts in their public school system. She has served on many community organizations in Arkansas and looks forward to getting involved in Indianapolis.

In 2012, Carla received a special commendation from the State of Arkansas for her work with non-profit organizations. In healthcare, she has developed and patented two medical devices that are being used in the radiation therapy setting.

Carla has made it her life’s mission to leave this world better than she found it, and she believes working at Community will definitely help her reach her goal.