By
Kris Kirschner
For release on June 26, 2019
Community Health Network

Indianapolis, IN—Indiana State Representative Kevin Mahan has accepted the position of executive director, security and safety preparedness for Community Health Network. He will be responsible for the strategic vision and day-to-day operations of the Network’s security services, disaster planning, emergency preparedness efforts, and network valet services. 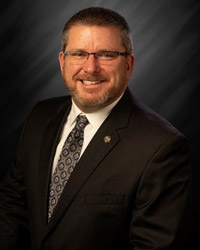 In his new role at Community, Mahan will lead the ongoing assessment of network-wide security needs for more than 200 sites of care. He will oversee development of policies and processes to ensure the safety and security of network patients, visitors, caregivers, and assets.

As a state representative, Mahan authored laws promoting government efficiency, oversite and transparency. He also authored a law allowing emergency medical technicians to administer epinephrine through a pre-loaded syringe or by loading their own syringes.

This session he authored “Josslyn’s Law,” which establishes the Sepsis Treatment Guideline Task Force and sets statewide protocol guidelines to screen patients for sepsis at all health care facilities.

Prior to his years in the General Assembly, Mahan served as a patrolman for the Hartford City Police Department and as Blackford County Sheriff. During his service, he built a new police and regulatory agency for the Indiana Gaming Association.

A State Farm insurance agent since 2007, Mahan received a bachelor’s degree in business administration from Indiana Wesleyan University. He has resigned from the House of Representatives and will begin his role with Community August 12.