By
Kris Kirschner
For release on February 28, 2018
Community Health Network

Indianapolis—Community Health Network announced that Donetta Gee-Weiler will be the new chief operating officer for the North region, beginning March 26. 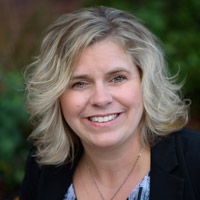 Gee-Weiler began her career at Community as an intern on the Ortho-Neuro unit during her senior year of high school in 1995. She joined the Network officially after graduating in 1996 and worked as a clinical tech while she attended nursing school. After becoming a registered nurse, Gee-Weiler provided care in Labor and Delivery at Community Hospital North, and as office clinical manager and practice administrator for Clearvista Women’s Care, Gynecologic Cancer Care, Hepatobiliary Surgical Cancer Care, and Maternal Fetal Medicine.

For the past five years, Gee-Weiler served as vice president for the Women’s and Children’s product line. During that time, she played a key role in building the first multidisciplinary Women’s Center within Community Health Network, served on the State Task Force for Neonatal Abstinence and developed a system for early identification and treatment of mothers/infants, developed the first ob/gyn hospitalist program at Community Health Network, and partnered with Community North providers and operational leadership to become the state’s leading hospital for deliveries for the past three years.

Gee-Weiler completed her master’s of business administration and master’s of nursing administration degrees in 2017. She has been recognized as an Indianapolis Business Journal “Forty Under 40” honoree and is a winner of the Indy’s Best & Brightest Health & Life Sciences award. She also is a 2016 graduate of the Lugar Series leadership development program.