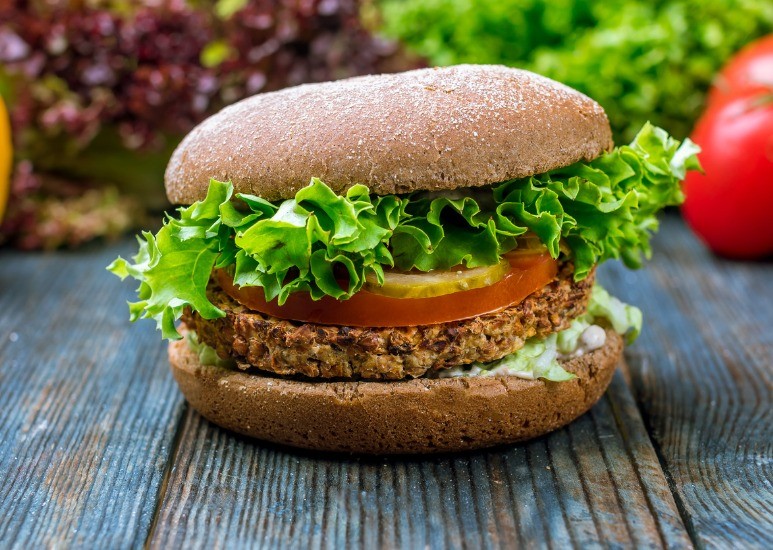 Meatless burgers are taking over menus across Central Indiana, but how do they stack up against the real deal? Here are the two big names to know in the world of plant-based burgers, and how they might affect your diet.

Know What’s in the Beyond Burger

The Beyond Burger is largely made from peas. A protein is extracted from yellow peas and then made into a powder, and finally formed into patties. It’s worth noting that peas are legumes, just like peanuts. While there aren’t any peanuts in the Beyond Burger, if you have a peanut allergy you may want to be cautious before diving in.

The fat content in the Beyond Burger comes from canola oil and refined coconut oil. While there’s a lot of misinformation about canola oil on the internet, the FDA stands by it as a healthy oil. It’s low in unhealthy saturated fat and high in healthy monounsaturated fats. Coconut oil, on the other hand, contains more saturated fat than butter. A little bit won’t hurt you, but doctors recommend limiting your intake of coconut oil.

Know What's in the Impossible Burger

The Impossible Burger is mostly made of soy. If you eat tofu or drink soy milk, there are no dietary surprises here. It also contains heme, which is a molecule that’s naturally found every animal’s blood and muscle. It’s rich in iron, and it’s what causes the “bleeding” when you bite into the Impossible Burger.

The fat content in the Impossible Burger comes from coconut oil and sunflower oil. We already covered why you should go easy on the coconut oil, but sunflower oil is another story. It’s a great source of healthy fats and Vitamin E, which boosts your immune system.

Compare Them to Beef

From a dietary standpoint, there’s not much of a difference between the Beyond Burger and the Impossible Burger. They both weigh in around 250 calories with 20 grams of protein, and share roughly the same fat content. For better or worse, none of those stats are significantly different than a burger made with real meat.

One of the reasons red meat has such an impact on the American diet is the amount of unhealthy fat it carries. For an 80% lean hamburger patty, you’re looking at 8.6 grams of saturated fat. The Beyond Burger has 6g of saturated fat, and the Impossible Burger has 8g. That’s still between 30-40% of your daily recommended intake, so plant-based burgers don’t offer much of a health benefit in the fat department.

Both meatless burgers have significantly higher sodium content than an unseasoned beef patty, too. Thankfully, the comparison isn’t all negative. Both plant-based options contain zero cholesterol, which is a huge win over a beef patty that contains 27% of your daily intake.

Even without considering environmental factors, there are still valid reasons to incorporate these meatless burgers into your diet. Like with any burger, they can be a flavorful way to get plenty of protein when eaten in moderation — especially for people with dietary restrictions.

Learn more about the fat content of your favorite foods, and understand the difference between healthy and unhealthy fats.

Latest in Diet and Nutrition

The Most Common Symptoms of Diabetes

Alert! Are You at Risk for Diabetes?

What is Type 2 Diabetes?

You Can Prevent Suicide This Holiday Season

The Most Common Symptoms of Diabetes

You're Not Alone. Let's Cope with Bullying Together.