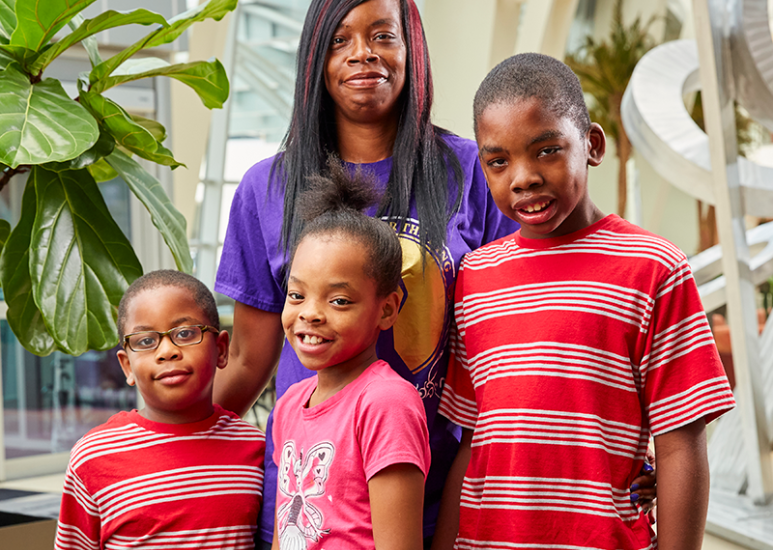 When Monica Lee’s three children started meeting with Meaghan Rhoades, a Community Health Network therapist embedded within an IPS school, she hoped it would help improve their behavior.

Little did she know, it would save her life.

Monica’s children range in age from kindergarten to fifth grade. They received school-based therapy from Meaghan, as well as family sessions which Monica would attend.

After one family session, Monica broke down. She was battling depression and felt alone. She didn’t want to get out of bed. She had a detailed plan to end her own life.

“I didn’t want to be here,” Monica said. “I thought someone else could do better raising my kids than I was.”

Meaghan immediately took action, telling Monica she needed to open up to someone. For Monica, her support team included her sister-in-law Christina, God, her children and Community’s therapist Meaghan.

Meaghan helped Monica manage the stress she was feeling and gave her someone to open up to.

A couple of times, Monica called Meaghan in the middle of the night.

“She answered and offered to drive me to the crisis center,” Monica said, who cannot emphasize enough the impact Meaghan had on her outlook, her health and her life.

How do you tell your children you’re depressed?

One of the most challenging situations Monica faced was telling her children.

“How do you go to your kids and say, ‘I think I want to kill myself?’” said Monica.

Yet Meaghan was there to help with that too, speaking with the children about what their mother was battling.

“That was devastating for me,” said Monica. “But they needed to know because of what I was facing and thinking.”

In the midst of it all, Meaghan continued to work with Monica’s children, helping them deal with behavioral issues, focus and cope with challenges they may face. Meaghan determined what triggered each child’s behavior and developed a strategy suited to each of their needs.

Because of this, Monica says her children’s behavior has improved tremendously. In a situation that would have originally caused her son to act out, he is now able to articulate his feelings and apologize if necessary.

Monica is doing well too, making progress each day and realizing her value to her family and friends. She credits Community and Meaghan for helping her get there and now recommends Community’s work to people in the community.

“If you don’t know, you deal with it by yourself,” she said. “But those resources are out there. ”And for those in the community feeling alone and like no one cares—Monica recommends reaching out to someone.

“Don’t be afraid. Just tell somebody—talk to them,” she said. “The strongest people have issues too. For me it was life-changing to have someone to talk to.”

You Can Prevent Suicide This Holiday Season

The Health Benefits of Giving Thanks

How to Approach Opioid Addiction with Empathy

How to Support Mental Health in Your Home

How to Set SMART Goals in the New Year

Tips to Keep Your Holidays Merry

How Long Do Thanksgiving Leftovers Keep?