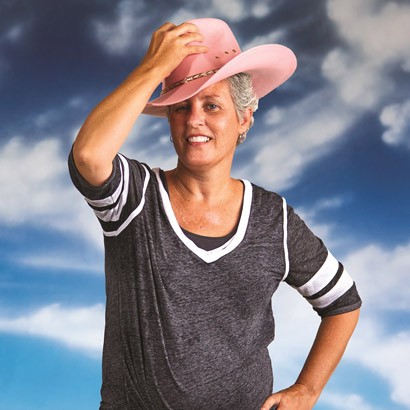 I don’t ask for help, but, I was paycheck to paycheck before all of this started. With this support, I was able to go get groceries to feed my girls.

Tiffany was a Community Health Network patient long before her breast cancer diagnosis. She had delivered both of her daughters at Community Hospital Anderson and received primary care through Community as well.

It’s no surprise then that, in July of 2017, when a breast exam followed by her first mammogram revealed cancer, she sought care from the health system she knew and trusted.

Tiffany was referred to Bilal Siddiqui, MD, an MD Anderson Cancer Network® certified physician focused on medical oncology at Community Anderson. She quickly realized this was where she was meant to be.

“I’m a straightforward and blunt person,” she said. “I asked him not to sugar coat anything. That’s what he did. I felt like he understood me and how I wanted to be treated.”

Tiffany felt the same way about her nurse navigator, Jill, who stood by her side throughout all of the tests and scans.

“She sat with me and squeezed my hand during the tough parts,” she said. “I don’t know anyone else who would have done that.”

Those appointments early on with Dr. Siddiqui and Jill also revealed another source of support – the Oncology Patient Assistance Fund, which provided a $250 gift card that Tiffany could use to purchase groceries, gas or medication.

“I don’t ask for help,” she said. “But, I was paycheck to paycheck before all of this started. With this support, I was able to go get groceries to feed my girls.”

A few weeks after her diagnosis, Tiffany underwent a double mastectomy under the care of Christina Kim, MD, an MD Anderson Cancer Network certified physician specializing in surgical oncology. She had been hopeful she would not require additional treatment. However, the cancer had spread to a lymph node.

In response, Dr. Siddiqui recommended chemotherapy, which began in mid-November and ended in March of 2018. At that point, Tiffany was deemed cancer-free. Since then, she has had a few additional procedures including reconstructive surgery under the expert care of Michael Stalnecker, MD, a plastic surgeon with Community Physician Network, as well as follow-up appointments at Community Anderson.

“I’m a believer in Community,” she said. “I’ve heard a lot of horror stories about people’s cancer care experiences. Had I gone anywhere else, I don’t think I’d have gotten this same level of care.”