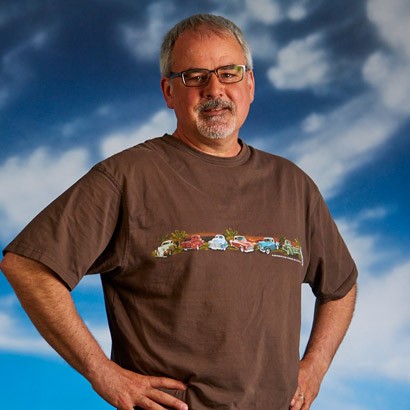 When I received the first card, we still had savings. But with the last two, our funds are mostly depleted, so those provided really critical relief to me and my wife.

It had been years since Paul had visited his primary care physician, whom he learned was close to retiring, so he took the opportunity to make an appointment in the summer of 2017 with Jeremy Hampton, DO, a family medicine physician at Community.

There, bloodwork revealed very low red blood cell levels, and a stool sample detected the presence of blood. A colonoscopy was scheduled with David Hollander, MD, who specializes in gastroenterology at Community Hospital East. This procedure confirmed the presence of a large tumor, and a biopsy confirmed Paul had cancer.

This news came as an emotional and financial blow to Paul, a pipe fitter, who at the time was working for a temp agency and did not have health insurance. With the help of Dr. Hollander and his staff, Paul was connected to Community’s WellFund program and able to enroll in the Healthy Indiana Plan, the State of Indiana’s health insurance program for qualified adults.

Simultaneously, planning for the surgery he needed continued. He was referred to Kevin McAree, MD, a surgeon at Community, on a Friday. On Monday, he had a CT scan which showed cancerous cells in his liver. The next day, he underwent surgery and spent six days in the hospital recovering.

Paul was informed he had Stage IV colon cancer, yet when he thinks back on this time, he focuses on the positive.

“I can’t say enough good things about my experience at Community,” he said.

Paul felt supported by the caregivers, and he quickly learned about the Oncology Patient Assistance Fund, which is made possible by donors to Community Health Network Foundation and provides $250 gift cards to cancer patients in financial need.

“I knew I wouldn’t be able to work, so I was extremely grateful,” he said.

For treatment, Paul was referred to Anuj Agarwala, MD, an MD Anderson Cancer Network® certified physician focused on medical oncology. He began chemotherapy treatment, which totaled 12 rounds, every other week. He suffered from loss of appetite and extreme cold sensitivity, but, again, he focused on the positive and the support he was fortunate to have from his wife Kris, family, friends and caregivers.

A few weeks after chemotherapy ended in January of 2018, Paul’s CT scan showed no new cancer. In May, it still looked clear. In September, Dr. Agarwala noted a few spots on his liver. Based on this development, he presented Paul and Kris with some options – keep an eye on it, undergo radiation or have surgery.

“Dr. Agarwala is fantastic,” said Paul. “He has a way of answering your questions without sugar coating his answers but not being all doom and gloom either.”

Paul opted for surgery, and Dr. Agarwala took his case to the Tumor Board for review. In October, Paul underwent surgery under the care of Jon Cardinal, MD, who specializes in hepatobiliary and pancreatic surgery. The procedure was a success, and Dr. Cardinal let Paul know he considered him to be cancer-free.

In the months and years to come, Paul will continue to see Dr. Agarwala for follow-up care. He is beyond grateful for the support he received throughout this journey – clinical, emotional and financial, including through the Oncology Patient Assistance Fund which has provided him with two additional gift cards.

“When I received the first card, we still had savings,” he said. “But with the last two, our funds are mostly depleted, so those provided really critical relief to me and my wife. I can definitely say I have been helped in more ways than one by Community.”