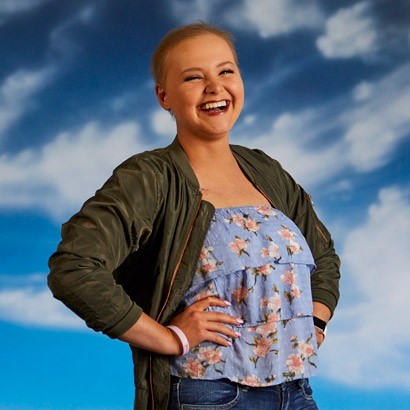 My favorite part was how fast everything happened – something was always getting done and we were making progress.

In late fall of 2017, Ashley was a first semester freshman at the University of Indianapolis and adjusting to college life. To stay in shape, she began joining her roommate at the gym, but she developed a rash on the back of her neck so she visited the University of Indianapolis Health & Wellness Center, operated by Community Health Network caregivers.

There, she was seen by Randy Lee, MD, who practices internal medicine in Community’s south region, including serving students and faculty on the UIndy campus. He and a Community nurse were able to help with her rash, but they were more concerned about the lump on her neck.

Ashley thought nothing of it – the lump had been there for two years, and her primary care doctor at home in Valparaiso had run blood work that showed nothing out of the ordinary. Dr. Lee persisted and recommended running additional tests including an x-ray, CT scan and then a biopsy. Ashley agreed, and a short time later she received the results. She had cancer.

“Thank God Dr. Lee and his team were so concerned about that lump or else it would still be there, and I would still think it was normal,” she said.

Since Ashley’s family and home were in Valparaiso – a two and a half hour drive away from Indianapolis, they were faced with a decision as to where she would receive care. Her father, who has Parkinson’s disease, felt strongly that a larger city like Chicago or Indianapolis would be their best option. They had each been impressed by the efficient and compassionate care Dr. Lee offered and so Community Health Network became their choice for Ashley’s oncology care.

Dr. Lee referred Ashley to Anuj Agarwala, MD, an MD Anderson Cancer Network® certified physician specializing in medical oncology at Community Cancer Center South. The day after Dr. Lee informed her of her diagnosis, she had an appointment with Dr. Agarwala. He ordered a PET scan, which determined her cancer was Stage II, and they inserted a port in preparation for chemotherapy.

“I was so thrilled with the people who became my care team,” Ashley said. “My favorite part was how fast everything happened – something was always getting done and we were making progress. As I went in for more appointments, I even began to get excited when I could hear Dr. Agarwala headed my way down the hallway.”

All of this happened leading up to Ashley’s first round of college finals and the holidays. With that in mind, Dr. Agarwala suggested Ashley focus on finals and spending time with her family and friends for Christmas. Her chemotherapy was scheduled to begin December 28.

For each of her twelve chemotherapy treatments that took place every other Thursday, Ashley would make the two and a half hour drive on Wednesday evening from Valparaiso to the south side of Indianapolis. She would stay in a hotel that night before making her way to Community Cancer Center South and then be driven home to Valparaiso by either her parents or friends who joined her for the treatment.

Her support team was strong. In addition to her parents, her boyfriend, family and close friends rallied around her. A cousin started a GoFundMe that raised significant dollars to help cover fertility planning treatments as well as her hotel stays. There were bake sales and #AshleyStrong bracelets and events at her old high school to raise funds to help in her fight.

Ashley was blown away by this generosity, which came into her life at just the right time. Her father had lost his long-time job and had taken on teaching tennis lessons to make ends meet, while her mother, a notary, had recently secured a job with better insurance benefits to assist with Ashley’s treatment costs.

“I expected it to be maybe $25, but it was for $250!” she said. “I wanted to cry out of gratitude. I was able to buy groceries for myself and my family, and I didn’t have to feel badly asking my parents to buy certain foods when they were already doing so much to support me.”

In the midst of it all, Ashley kept focused on her schoolwork. While her treatment regimen and desire to live at home prevented her from continuing her studies at UIndy for the spring semester, she enrolled in online courses at Ivy Tech.

“I was unsure about it at first, but it turned out to be a good distraction and really nice to have something to focus on during treatment,” she said.

At the end of June, her CT scan showed she was in remission – a win for Ashley, her family, friends and care team. After her last chemotherapy treatment she rang the bell at Community Cancer Center South signifying her win over cancer. Joining her were her Community care team, her mother, boyfriend and a few friends – one of whom even surprised her by driving down from Valparaiso

“I really didn’t think I would cry, but when you read the plaque, you can’t help it,” she said.

She’ll continue to see Dr. Agarwala periodically for follow-up visits, but she’s ready to get back to her college life. In late August, Ashley will return to UIndy, where she has recently been accepted into the physical therapy assistant program. She’s excited about focusing on the relationships she holds dear and her future – as a daughter, friend, girlfriend, student, caregiver and now a cancer survivor.