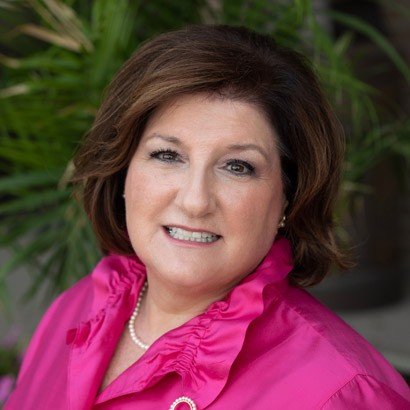 Joyce Irwin has served as Community Health Network Foundation’s President and CEO since October of 2012.

Joyce was born and raised in Seymour, Indiana, where most of her family still lives. At the age of eight, she contracted meningitis and was hospitalized at Riley Children’s Hospital, not expected to live. From that experience, one brother became a minister and the other a physician. Joyce has always had a love of healthcare and a purpose of giving back. This role is the fulfillment of two passions.

She declares herself a diehard Hoosier after being raised in Indiana and graduating from IU for both her undergraduate and graduate degrees.

With more than 20 years of experience in healthcare ranging from managing physician practices owned by hospital systems, to managed care management and regulatory experience in both pharmaceutical and diagnostics, Joyce has a wide range of experience. Joyce enjoys the healthcare profession because of the compassionate, caring people with high integrity. She is excited about the many challenges in the near future on how healthcare is financed and delivered.

Joyce’s husband, Marty, is the senior project manager for the Indiana Department of Environmental Management. They have two shelties and two cats, which are like their children. Joyce is very involved in the community on the executive leadership team for Go Red for Women, Board of Directors for Women in Government, and president of the Lugar Series for excellence in public service. Having grown up in a very musical family and having studied voice at IU, she has had the opportunity to sing for several U.S. presidents and at governor inaugural ceremonies. President George W. Bush presented her with the honor of “Outstanding Community Volunteer” and she is also a “Sagamore of the Wabash” recipient. She has even experienced the excitement of landing on a carrier at sea.